View source
watch 01:36
We're Getting Mutants in the MCU - The Loop
Do you like this video?
Play Sound

Matthew Prokop
Jimmie "The Rocket Man" Zara is a freshman at East High. He is on the East High Basketball Team.

Jimmie wishes to be a basketball star like Troy. He tells Troy that he wants his locker, and Jimmie and his best friend, Donnie Dion, one day find their lockers empty after showering. Troy and Chad appear behind them, saying that they are emptying Jimmie and Donnie´s lockers so that they can make a locker switch, which proves untrue. Troy and Chad start running around the school with Jimmie and Donnie's clothes, Jimmie and Donnie chasing them in towels until they arrive at the auditorium and run out across the stage during a rehearsal, where Taylor takes a picture for the yearbook. At the end he sings "We're All In This Together" (Graduation Version.)

During the championship game at the last few minutes, Troy calls an overly excited Jimmie to the game. During the final seconds of Now Or Never, Troy unexpectedly passes Jimmie the ball, allowing Jimmie to make the winning shot. Jimmie dreams of following in Troy's footsteps after Troy graduates, so he asks Troy to let him have his locker after Troy's graduation. As a result, Jimmie and his best friend Donnie find their lockers emptied only to turn around and see Troy and Chad with their clothes. Chasing Troy and Chad, they end up in the theater where they (not Troy or Chad) are given detention by Ms. Darbus. Later, Ms. Darbus casts Jimmie as an understudy. Troy and Gabriella lie and tell Jimmie that Sharpay has a secret crush on him.

During the Senior Year Spring Musical Medley, Jimmie  recieves a text message from Troy explaining that he won't be there for the first act. Jimmie then tries to get over his anxiety by himself, and after a delay, goes to sing with Sharpay who is disgusted by his cologne "Babe Magnet" (Just Want To Be With You (Reprise)). His outrageous outfit and caustic attitude win him great acclaim from the audience. 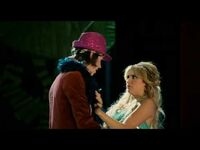