Ricky Bowen by (everyone, originally by

Voted "Most likely to sleep through his alarm."

A snarky sweetheart, a B-minus student, and a star. Ricky's been dating fellow junior Nini for a year. When he takes a break with her, he tries going out with other girls, but only talks about Nini the whole time.

But then she unexpectedly breaks up with Ricky, he launches a bold plan to get Nini back — by auditioning to star opposite her in the school's production of High School Musical. Ricky's class-clowning covers a deep fear that he's not actually great at anything, except coasting by on charm. Hangs out a lot with his best friend and fellow skater Big Red. 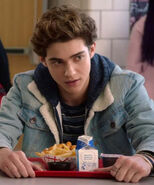