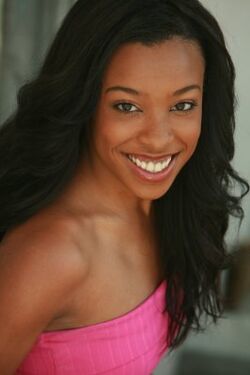 Tanya Chisholm (born July 1, 1983)[1] is an American actress and dancer. In Primary & High School, she attended and graduated from Westminster Christian Academy in 2001 and graduated from University of California, Los Angeles in 2005. She pursed to continue wanting to be an actress. She is mostly known for her role as Kelly Wainwright on the Nickelodeon sitcom, Big Time Rush. She is also known for her role as Marcie on the Legally Blonde spin off Legally Blondes, (otherwise known as Legally Blonde 3), acting along side Camilla Rosso and Rebecca Rosso. She has guest-starred shows such as, Cory in the House, Ghost Whisperer, and Cold Case. She also had a recurring role on Veronica Mars. Tanya Chisholm has also appeared in YouTube group, WongFuProduction's, videos such as Linappropriate and David Choi's music video for Won't Even Start as an extra.

She is perhaps best known for playing the main 'Sharpette', Jackie, in the Disney movie High School Musical 2; the only Sharpette to appear in the film's main credits. Chisholm has done other work for Disney, including a guest role on Cory in the House, and has landed a supporting role in the movie Fired Up!. She attended Westminister Academy and graduated in 2001 and attended UCLA where she graduated in 2005 and pledged Delta Gamma. Chisholm has also appeared in numerous television series such as Veronica Mars (recurring), Ghost Whisperer (guest star), and Cold Case (guest star). She currently stars as Kelly Wainwright in Nickelodeon's hit series Big Time Rush. She also had a recurring role in Legally Blondes (2009) as Marcie, one of Izzy and Annie's scholarship-provided friends. She has also appeared in David Choi's music video "Won't Even Start" directed by Wong Fu Productions on YouTube. She appeared in the cast of Big Time Rush's Season 2 introduction scene. She also appeared in Cee Lo Green"s music video "Cry Baby". She was also featured in 3 shorts from youtubers Wong Fu Productions called "The End of Wong Fu: A Christmas Story", "Two Weeks Later: Resolution Fails" and "Linappropriate"